Preserve this Natural Wonder in CA

The threats to the Delta, however, are not purely external. Farming and urban development in and around the region has had a major impact on both land and water. In summer, crop dusters careen over the low fields, trailing pesticides from their wingtips. And then there are the levees, which have altered the natural drainage patterns. Restricted within high banks, the rivers weaving through the Delta no longer overtop their banks during great spring floods, which once replenished the native peat soils with organic material. Over the years, this “ straitjacketing” of the rivers, along with intensive cultivation, has caused large sections of Delta soils to dry up and the land to sink. This subsidence can be seen firsthand from the levee roads between Rio Vista and Sacramento. On one side of the road, the languid Sacramento River rolls toward San Francisco Bay; on the other, orchard rows radiate from the base of the levees, 10 to 15 feet below the level of the water. Not only is low-lying farmland at severe risk from levee failure, say state officials, so, too, are the intake pumps for the state and federal water projects. One nightmare scenario could result from a combination of sea level rise and levee failure – possibly triggered by an earthquake – causing the inrush of brackish water from San Francisco Bay and overwhelming the pumps that feed the California Aqueduct and Delta-Mendota Canal. In a 2006 study, University of California Davis geology professor Jeff Mount projected a 64-percent risk of a massive levee failure within the next 50 years.

Editor’s note: This last paragraph is as written by the author but the information is way out of date. Check the links on the QUESTIONS page for the Truth About Delta Levees, which is that the Delta levee system is not in bad shape but could be made more robust for extreme floods and earthquakes.

Back on Staten Island under the massive levees, I watch more cranes wing in against the setting sun and wonder about the future of the Delta as the state moves into another year in an era defined by drought and intensifying water conflict. The Delta remains, in spite of our best efforts to untangle it, a great knot – a watery maze in which numerous endangered species and 500,000 residents happen to dwell. As the sun dips past the horizon, the clatter of the cranes ceases. It’s time to head home. Silence is soothing when you are in search of a respite, but can be unnerving when you know you are standing on a battlefield.

Jeremy Miller is a contributing editor to High Country News. Photo credit to the author.

Doug Hemly points to a map where the BDCP tunnels would pass.

Doug Hemly owns land at the proposed starting place of the tunnels. His farm, Greene and Hemly, grows pears, apples and other fruits on a 160-acre plot beside the Sacramento River. “We’ve been farming the same piece of dirt for the last 150 years,” says Hemly. In a conference room, he unrolls an aerial photograph map of the Delta, tracing his finger along the proposed path of the two tunnels, rattling off the names of farmers in the path of the project. Like many in the Delta, Hemly sees the BDCP as an elaborate water grab. He says the demands of southern California have grown beyond what the Delta can possibly support. “I saw what was in the cards for the Delta on a trip to (Central Asia’s) Aral Sea,” he said. There, unchecked water diversions reduced the inland sea to 10 percent of its original size, decimating once vibrant fisheries. “That’s where we’re headed here if we don’t think this thing through.” 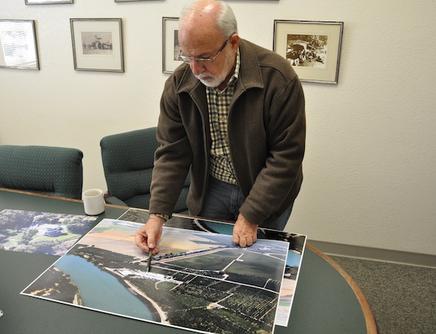 To see the people who live in the path of the proposed Delta tunnels, I travel 20 minutes north of Staten Island, to the town of Courtland, 30 minutes south of Sacramento. Posted all along Highway 160, which wends atop the levees, are small signs that read STOP THE TUNNELS. Unlike the sprawling farms of the southern Central Valley, most of the Delta’s 500,000 acres of agricultural land is comprised of far smaller parcels, occupying 160 acres or less. The state is reluctant to say how many residents could potentially affected by the proposed tunnels, or how much private property would have to be condemned if the project were to move forward. But a lawsuit filed by dozens of property owners in the Delta in 2011 may give a hint. In 2008, DWR surveyors sought temporary permission to take soil samples on private property along the proposed tunnel route. In response, roughly 150 property owners filed suit, saying that the state first needed to undergo eminent domain proceedings before entering private property to conduct the surveys. In 2011, a San Joaquin County superior court ruled that the DWR surveys constituted a “taking” of property and required a formal hearing. Last month, an appellate court upheld that ruling, stating that the 200-foot deep bore holes for soil sampling “would intentionally result in a permanent physical occupation.”

The triangular summit of Mt. Diablo rises beyond the flooded fields of Staten Island, an important sanctuary for California’s Sandhill cranes

According to the Department of Water Resources, however, a mere one percent of Staten Island would be disturbed by the tunneling and “the BDCP would implement stringent avoidance and minimization measures year round.” Among these measures are barriers to isolate roost sites from construction zones. The DWR also says the plan would protect an additional 7,000 acres of new crane habitat elsewhere in the Delta.. But Ringelberg says it’s not as simple as designating suitable habitat. Each winter, the cranes return to within a few feet of their previous years’ roost sites, he says, and even if tens of thousands of acres of habitat for the birds are protected, there’s no guarantee that they would use it. He points out that it took several years after the establishment of the winter marshes for birds to come to roost on Staten Island. “The construction of the tunnels on Staten Island will be 24-7. With that kind of disturbance, there’s little doubt the birds will leave,” says Ringelberg. “This habitat is simply incompatible with massive industrial activity.”

But there also lies the rub. Critics of the plan, such as local activists Osha Meserve and Erik Ringelberg, question the plausibility of a plan to “restore” the Delta while simultaneously shunting large volumes of water under it. “The whole Delta ecosystem is in bad shape,” says Ringelberg, who works as a biologist with a Sacramento based consultancy firm. “And if you take more water out of a system that is already stressed, you exacerbate the problems.” The island is an important migratory stopover and is also situated in the proposed path of the Bay Delta Conservation Plan’s centerpiece twin water delivery tunnels. In addition to the tunnels’ great volume, Meserve, an attorney with Sacramento-based firm Soluri Meserve, points out that construction will require the use of massive tunneling machines that will create significant land impacts. “There’s going to be a heck of a lot of disturbance associated with ten years of construction,” she says. “It will sweep through the area with noise, light and glare and create millions of tons of muck that will displace birds and damage what is now good habitat.”

Sandhill cranes fly over Staten Island, an important stopover on the Pacific Flyway in the path of the proposed Delta tunnels. 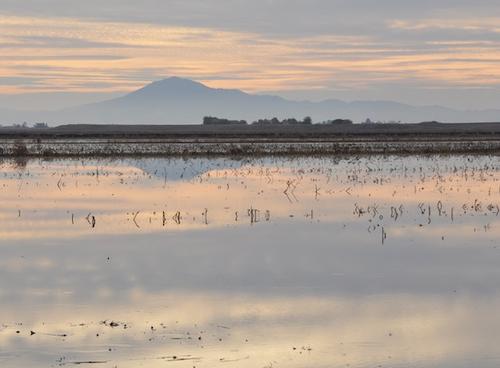 Like most of the Delta, Staten Island has been reclaimed by way of an intricate system of levees. A “working landscape” acquired in 2001 by the Nature Conservancy, the sanctuary occupies 9,000 acres of intensively cultivated land made habitable for birds through systematic floods meant to mimic natural winter floods that took place before the levees were built. In addition to being an important migratory stopover, the island also happens to be situated in the proposed path of the Bay Delta Conservation Plan’s centerpiece twin water delivery tunnels. Each capable of siphoning 75,000 gallons of water per second out of the Sacramento River, the tunnels would deliver the water some 35 miles to pumps in the southern reaches of the Delta. Touted by Gov. Jerry Brown as a solution to the state’s intractable water conflicts, the BDCP seeks “co-equal” goals: restoring the Delta’s aquatic ecosystems while also enhancing the state’s water supplies.

Today that conflict has escalated, as the state faces its most severe drought on record and Gov. Jerry Brown and the California Department of Water Resources push ahead with an ambitious $25 billion plan to re-plumb the Delta, known as the Bay Delta Conservation Plan, or BDCP. And yet, as the Delta’s future hangs in the balance, few Californians seem to grasp what is at stake. Though water from here irrigates some three million acres of farmland and supplies drinking water to over 25 million people, three out of four Californians don’t know where or what the Delta is, much less how it functions in the state’s highly engineered water systems. Can California possibly make good decisions about the fate of this 1,100-square-mile estuary when it remains terra incognita to such a large proportion of its citizenry? Indeed, from the very first European expedition into its dark heart, the Delta has perplexed travelers. Though I live near its western margin and have visited the watery region numerous times over the years, it still remains a difficult place for me to fathom – a place of maze-like channels, clipped sightlines and mists that seem to emanate from the imagination of Carl Sandburg himself. Last December, in hopes of further allaying my own ignorance, I traveled to the Delta once again, this time to see a small swath of its landscapes and its species, and to speak with a few residents who depend on the integrity of its land and water for survival. 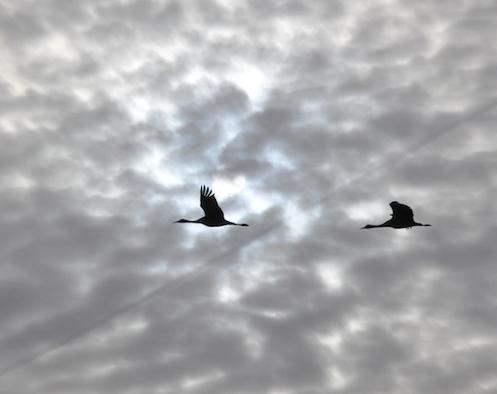 Doug Hemly points to a map where the BDCP tunnels would pass.

I stand in flooded farmland on a dead end dirt road in California’s Sacramento-San Joaquin Bay Delta. Overhead, dozens of greater sandhill cranes make a jagged line against the gray winter sky, descending into the beige fields with an eerie clatter. Snowy egrets and great blue herons stalk the shallow water, while flocks of starlings launch from the roadside and coalesce into great swarms. The wild avian display here on Staten Island – one of 60 islands scattered across the Delta’s waters – is a jarring contrast to the human drama unfolding across the region. For most people outside this watery region, where the state’s two largest rivers end and its greatest water engineering projects begin, the Delta is typically seen through a veil of conflict – one pitting endangered fish against the needs of water-starved farms in the Central Valley and cities in southern California. 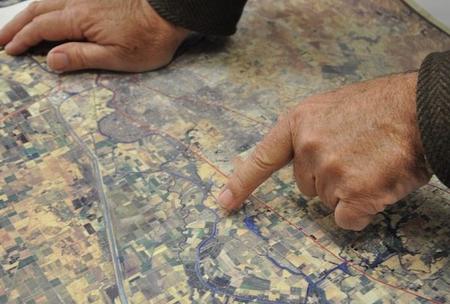 The future of the Sacramento Delta hangs in the balance.  But few Californians seems to grasp what is at stake.

WHY DO WE CARE ABOUT THE DELTA?