Finally, prior to about a million years ago, there was another more geological factor which influenced sea level more than climate, namely tectonic changes in the earth's crust which impacted the depth of the oceans.  The figure at the right, which also has the time scale reading from left to right, like Wright but the opposite of the initial figures above, indicates that for most of geologic history, long-term average sea level has been significantly higher than today.

However, as explained by Wright "if the magnitude of the Oxygen 18 isotope values is a measure of the ­­extent of continental glaciation, then before about 700000 years B. P. the ice sheets may have been generally much smaller than at any time since (see Fig. 2 to the left). Periodic expansions every 41000 years or so reflected primarily the obliquity cycle of insolation, which is stronger at higher latitudes. After about 700000 years B.P. the ice sheets expanded to lower latitudes, where the higher summer insolation of the 23000 and 19000 year precessional cycles had a stronger effect on the glacial regime.  The major uncertainty in the Milankovitch explanations for continental glaciations is the great strength of the 100000 year rhythm of glaciation, despite the minimal climatic effects calculated for the eccentricity cycle of this frequency."  And, as explained further by Dennis Hartmann "Milankovitch calculated seasonal and latitudinal shifts of insolation that appear to be the pacemaker of ice ages, but the nature and magnitude of the resulting climate changes are determined by processes that take place within Earth's climate system. In order for the climate to swing from ice age to warmer conditions, the climate system must amplify the response to the influence of Earth's orbital changes. A "positive feedback" is a process within the climate system that amplifies the response of temperature to external influences such as changes in Earth's orbit. One such process is ice-albedo feedback. Snow and ice absorb a smaller fraction of the incoming solar radiation than unfrozen ocean or ice-free land, reflecting more of it back to space. The "albedo" measures the fraction of the incoming solar radiation that gets reflected back to space. When temperatures are cold enough for snow cover to last through a summer season, much less of the energy available in sunshine is absorbed than would be without a covering of snow.

But this is not a surprise to Quaternary geologists who know that in the last 500000 years there have been 4 or 5 ice ages separated by warmer inter-glacial periods.  Geologists who work in the Bay Area know that at the peak of the last inter-glacial, 120000 years ago, sea level was 20 feet higher in the Bay than at present.  It then dropped more than 300 feet so that the shoreline was out by the Farallon Islands. 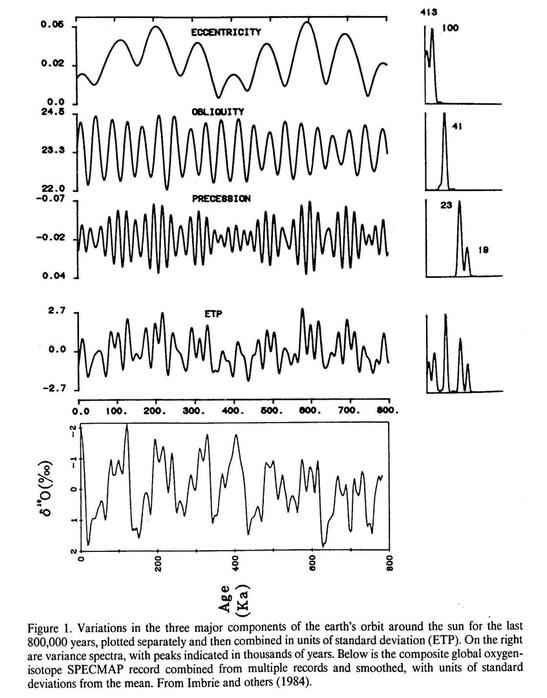 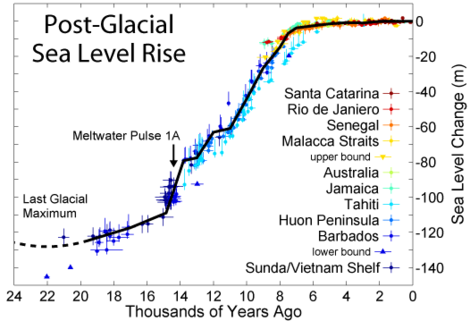 While many people might be surprised at the variation in both California and worldwide climate going back 1000 or even 3000 years, in fact this is nothing!  Worldwide sea levels, reflecting mostly climate, have in fact been relatively stable for about 8000 years.  This is in fact the period over which the Sacramento - San Joaquin Delta evolved as a swamp, the oldest peats in the Delta being 7000 years plus old.

The "Mediaeval Warm Period" and the subsequent "Little Ice Age" can be seen in the figure to the right, which goes back 3000 years.  This figure shows sea surface temperatures in the Sargasso Sea but is consistent with other data including the observations of lengthening of glaciers in the Swiss Alps during the Little Ice Age. The last 100 years can thus be viewed as  part of the 300 year recovery from the Little Ice Age, but no-one knows for sure how long this pattern will persist.  However, it seems reasonable to assume that in California we should at least plan for 6 year droughts and a possible repetition of the 1861-62 megaflood in the next 50 to100 years. 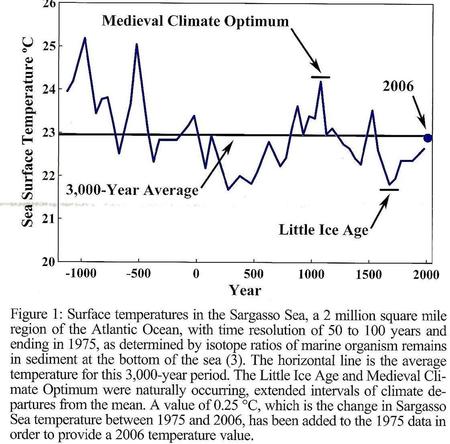 Going back even further into time, it seems that "MEGAFLOODS" have occurred in California once every two hundred years or so.  The figure on the left, from an article in Scientific American by Mike Dettinger of the USGS and Lynn Ingram of UC Berkeley, consolidates information of various kinds for four different basins. Within the same timeframe of 1000 years there is also evidence of longer droughts than the 3-6 year droughts that we see in the last 100 years, although the longer droughts occurred back in what is known as the "Mediaeval Warm Period", a period when temperatures  were slightly warmer than at present and when Greenland acquired its name.

Figure from Dennis L. Hartmann of the University of Washington 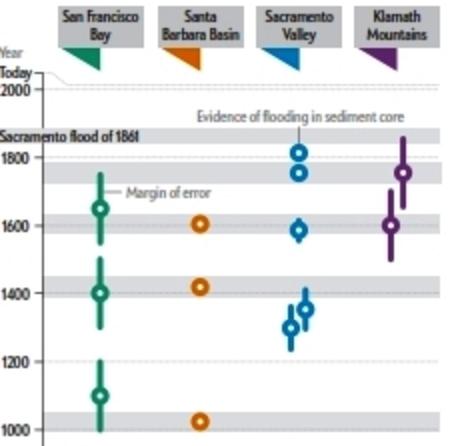 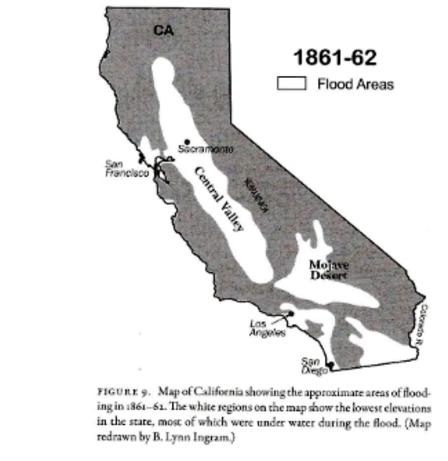 But, going back in time, the first major event of interest is the "MEGAFLOOD" of 1861-62 for which we have historical accounts.  From December 1861 into January 1862 it reportedly rained for as much as 40 days and 40 nights at some locations.  The Central Valley became a vast inland sea decimating the California cattle industry and flooding the new State capital of Sacramento as well as many other towns. Flooding also occurred in the Mohave Desert, the Los Angeles basin and the Imperial Valley. The first chart on this page shows that less water than usual was exported in 1983 and 1998, the second year of an El Nino event, because the fields are drenched and there is nowhere to put the water.  Imagine how low the exports would have been in 1862!

The figure to the left shows bunches of wet years and the bunches of dry years that are very apparent and cannot be entirely the result of chance. But, what causes them?  Nobody knows for sure, but it appears that they result from the interaction of various oscillations that can be observed in global weather patterns.

In particular, they result from interaction of the ENSO and the PDO.

The ENSO is the El Nino - Southern Oscillation and the PDO is the Pacific Decadal Oscillation. You can Google these terms for more information but basically an El Nino event is marked by the warming of equatorial waters in the Eastern Pacific and the positive phase of the PDO is marked by warming of the North Pacific Ocean more generally.  When an El Nino coincides with the positive phase of the PDO, we tend to get heavier rain and more frequent "pineapple express" or "atmospheric river" events in California.  This is what happened in 1982-1983 and 1997-1998. See "The West Without Water" by B. Lynn Ingram and Frances Malamud-Roam for more details.  (The figure below is taken from the book.) That book also goes back a thousand years or more and reconstructs California climate variability by combining data from multiple sources including tree-ring studies and sediment cores. 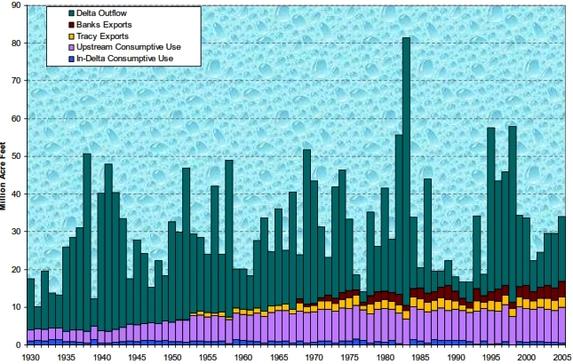 It should be clear from the above discussion that not only has the climate in California been rather variable over the last 100 years, but it has been even more variable if you look at windows of, say, 1000, 100000, 1000000 or 10000000 years.  In that context, climate and sea level in California are relatively stable at present.  That is, we might expect the climate variability seen over the last 100 to 200 years to persist for at least another 50 to 100 years.  But that also means we should at least plan for 6 year droughts and a possible repetition of the 1861-62 megaflood  - and neither the existing flood protection system nor the existing storage and conveyance systems adequately provide for such events!

After several false starts, this sequence of ice ages was more or less explained by the Serbian mathematician Milankovitch in 1930, but the association of the ice ages with the variation in solar radiation as controlled by changes in the inclination of the earth's axis, the precession of the equinoxes, and the eccentricity of the earth's orbit, the Milankovitch cycles, has only been more fully explained in the last several decades. The figure on the right, taken from the classic 1989 paper by H.E. Wright, compares the combined effect of the Milankovitch cycles with the Oxygen 18 isotope as measured in ice cores, which is a proxy for the volume of ice in continental ice sheets and hence sea level. Note that the time scale is backwards from that in the figures above. 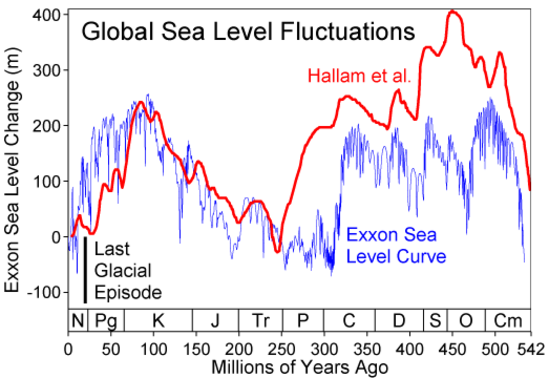 Thus, as the ice expands, less solar heat is absorbed, which tends to cool the climate further, and leads to further expansion of the ice cover. This ice-albedo feedback process can make the climate more sensitive, so that more temperature change results from influences such as changes in incoming solar radiation." Deep ocean currents and atmospheric CO2 levels are also thought to participate in significant feedback loops.